After travelling 7,000 kilometres from Doha, flying through five time zones, now we’re landing at Kuala Lumpur International Airport. There is a huge crowd at the passport control. Everyone is patient, but some people flip their lids again and again when a few cheeky tourists want to jump the queue. They get shouted at and are sent back to wait at the end of the line. Especially Americans cannot abide such disrespect.

Passport officers check everybody very comfortably, with a grain of almightiness on their faces, while doing this seemingly very exhausting duty. After the tenth passport has been checked, one of them raises his hand and asks for a break very spectacularly. He closes the window very accurately, picks up his belongings and like being the martyr and steps out from his cage. With those ten bleeding wounds he just got in the past few minutes, he lumbers into the breakroom. We almost feel sorry for him… It would have been a remarkable role in a theatre but not here, I believe. Maybe you also noticed this kind of behaviour among officers and clerks nowadays. They all believe that they’re doing us favours. The distance is just growing between officers and humility.

We got the passport stamps; finally, and the luggage has also arrived. Money exchange is done and we also have a local SIM card with internet. Now it’s easier for us to decide what the fastest way into the city is. The express railway (KLIA), which connects the airport with the city centre, is just a few metres far from the baggage claim area. It is an easy-to-use mean of transport with microchip tickets, electronic fare gates and accurate arrival/departure times. It takes 28 minutes and 70 ringgits (approximately 5,300 HUF) to get to the city centre. The first section of the railway goes along the airport fence, parallel with the runway. The train is unstoppable but a Boeing is faster than us and vanishes in the clouds.

We get off at the very first stop and continue our journey by taxi. For a taxi, you need to buy a ticket at a cashier’s desk. We say the address and get a slip of paper in return. At the taxi, we give the paper to the driver, he opens the boot lid and we get in. This system is very simple, it takes only 10 minutes to get to the hotel. Our room has a nice view on the Petronas Towers, the tower blocks around us and the park underneath. We just leave our baggage inside and go downstairs to the streets. We walk through the bustling park that has a lush flora, fascinating flowers and lawn. We take a look around and stroll at a slow pace, but it takes only 8 minutes to get to the towers. The cashier points out that there are no more tickets for today but for tomorrow morning only. We buy them, and while leaving, I tell the security guys: “I’ll be back!”

Back to the hotel. There’s the Skybar at the 33rd level. The entire floor is a bar with a long pool in the middle. You can find small tables and pillows next to the windows. It’s quite a view…if you’re among those approximately 15 people sitting by the windows. But one can only see the middle section of the towers from the rest of the bar. We are disappointed…

We walk back to our room and realize that actually we have a lovely view to the towers, too. We make a coffee and sit down on the wide edge of the panorama windows. Now we’re nibbling some chocolate and pistachio and watching the Sun disappearing over the horizon. It’s nearly night-time but the city and the towers are brightly lighted. We need to close the blinds if we want to sleep. 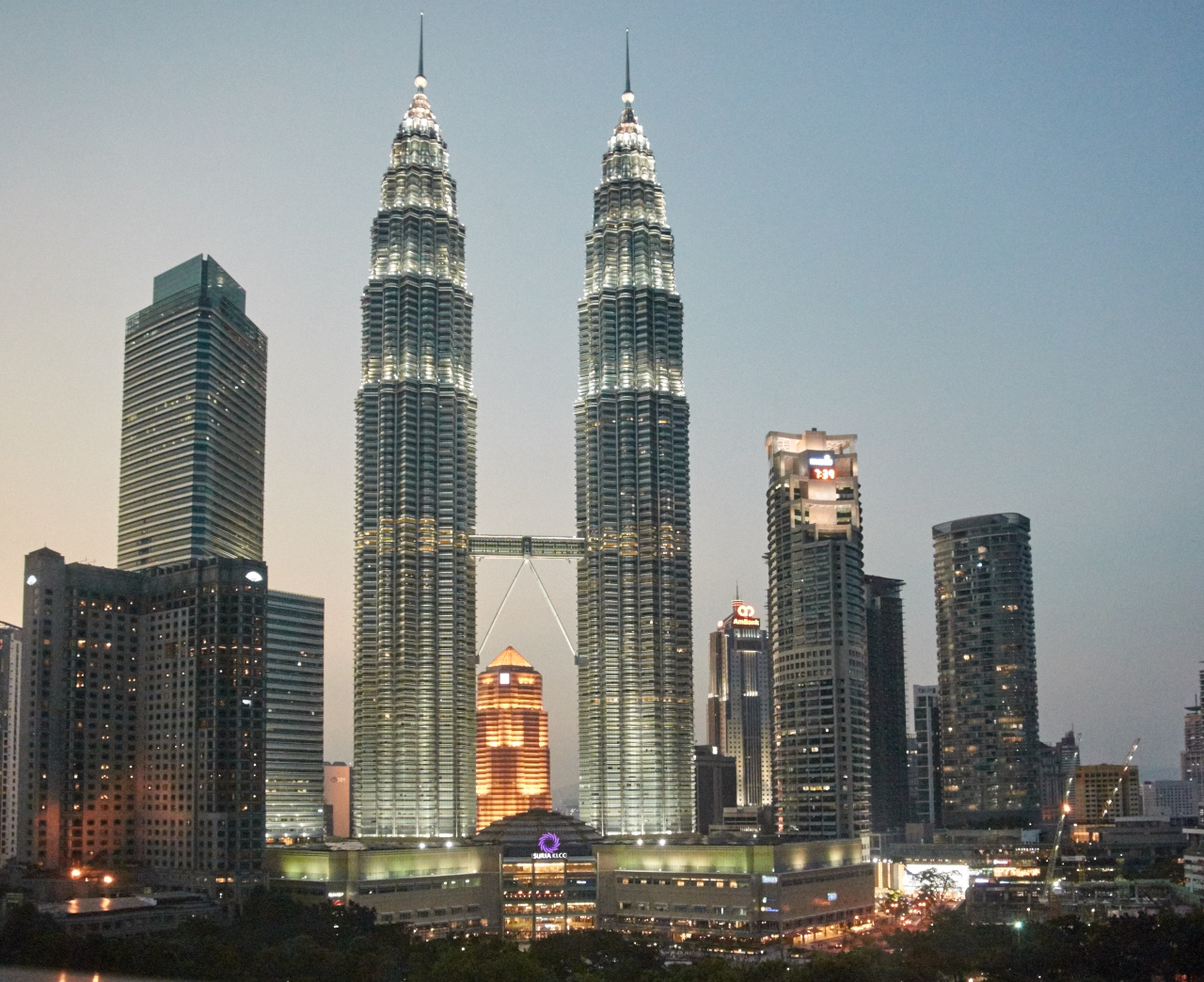 This entry was posted in Buildings, Malaysia.