After the baggage drop-off we’re having a fast security check. We fight our way through the usual row of shops and those hostesses offering credit cards, and take a look at the exhibited cars. Everything was OK at the passport control and the gate is just in front of us, we start boarding. Seats are comfortable and there is sufficient legroom too. The weather is cloudy and it’s spitting with rain, 8 °C. As the plane takes off from the runway of Ferihegy Airport, we leave behind our habitual, everyday life. We desire new impressions, experiences, tastes, smells and colours. Engines rumble reassuringly under the wings while our thoughts revolve around our destination, Malaysia. We’re dreaming about the next few days.

Our contemplations are ruined by uproarious laughters of a small group. They’re mainly women over 50, guzzling vodka-coke and being louder and louder after each drink. “Hey, have you heard that? They’re giving free booze! I’m drinkin’, are you drinkin’?” Yes, they’re drinking. We have been sitting here only for an hour, but I’m already losing my mind. We calm down somehow, fighting with our earphones against the annoying noises.

This trip is unusual: basically, we’re away on business. I am giving a training the next week for the regional sales team of a multinational company. In many cases, hunger for knowledge comes with impatience. People don’t want to spend years on gaining experience by themselves and by hard work. They simply buy me for two days and I’m just going to speak all day long. Malaysia is a remote country for a European, a return travel takes two days in itself, so we decided to kill two birds with one stone and make our trip longer in order to spend some time in the country.

We prepared for this trip. We spent days of searching the web what can be done in just a few days so we made a list of places which we want to visit at any cost. Once we had the plan, we contacted a local travel company. They provided cars, drivers, boats, tour guides and they reserved accommodation. It’s only us missing.

Malaysia… We didn’t choose it, it chose us. We were given the opportunity and now, we’re on our way there, flying above the clouds.

Malaysia is situated near the Equator in Southeast Asia. It has a landmass nearly as big as Germany, and has approximately 30 million inhabitants (2014). The capital city is Kuala Lumpur, but the governmental centre is Putrajaya. Geographically, the country can be divided into two parts: West Malaysia (Peninsular Malaysia) and East Malaysia (Malaysian Borneo) which are 500 kilometres far from each other. This time we visit the Peninsular Malaysia, which has a mountain range lying along its axis with a dense rainforest. We can call it a real “green” country with forests on 60% of its territory.

Only being recognized in 1957 as an independent state, Malaysia is a pretty young country. In the 1st century B.C. Indian-Malaysian states already existed in this area, which were united into an empire during the first millennium. There is proof for the presence of the Islamic religion from the 14th century. At the beginning of the 16th century they were under Portuguese, and later till 1795 under Dutch rule. The British comes in line and their reign lasted till the Second World War. There was a Japanese invasion in 1941, but after the war the British came back and established the Federation of Malaya under their protection. There were conflicts in the 50’s which ended up in a revolution. Their independence was only recognized in 1957 when they became an independent state of the Commonwealth.

Malaysia is a federal constitutional elective monarchy. The head of state (commonly referred to as the King of Malaysia) cooperates with the parliament and government. The King is elected to a five-year term from among the nine hereditary rulers of the Malay states. The system of government was modelled on the Western parliamentary system – a legacy of the British colonial era. 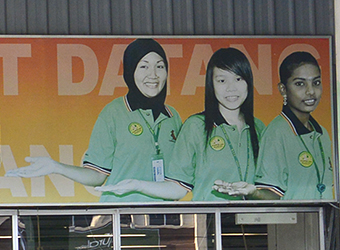 It is a real multicultural country: the official language is Malay, but they speak English, Chinese, Tamil, Telugu, Thai and other tribal languages. 50% of the population is Malaysian, 12% are Malaysian aboriginals, 24% is Chinese, 8% is Indian (mainly Tamil) the rest 6% is other. According to religion, 53% of the population is Sunni Muslim, 17% is Buddhist, 12% goes to Taoism and Confucianism, 7% is Hindu, 6% is Christian and 5% is for other religions. You need tolerance here, to respect the values of people you are living with.

In the last few decades, Malaysia has changed a lot. It’s not an off-the-map, lagging country anymore, but it has become a strong, industrialized state. IT and consumer electronics form the main part of their incomes. I really hope that I will have the chance there to broaden my knowledge about this country.

I’m looking forward to arrive, the plane is getting closer to its destination, but we still have time to take a nap before…

This entry was posted in Malaysia.